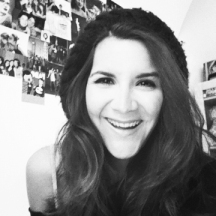 Joana is a journalist, writer and political commentator.

She was born in Lisbon in 1988. Due to a bizarre set of events she happens to be bilingual in Portuguese and German. While her work is mostly in English, she can also speak French and Spanish, for good measure.

Joana moved to London in 2006, graduated in Advertising three years later, and worked in fashion PR & communications for a bit, writing for Fashion 156 and WWD. She kept her love for clothes but got a bit tired of the salad-only diets imposed by the haute-couture industry.

By February 2010 she became one of the founders of the National Campaign Against Fees and Cuts, as well as its Chief Press Officer – a job she held until after the collapse of the student movement.

Around the same time she started writing for a series of blogs and publications. In the summer of 2010 she visited Palestine, from where she wrote about the plight of people living in internal refugee camps and the effects of the Apartheid Wall.

In February 2011 she travelled to Cairo to cover the occupation of Tahrir Square. She returned to Cairo after the fall of President Mubarak which allowed her to report on the wake of the “Arab Spring”.

Back in Britain, Joana was the first reporter to cover the fight of Focus E15, a group of London single mothers campaigning to be rehoused, after being evicted from a hostel by Newham Council in 2014. She has reported from a series of mass demonstrations, occupations, deportations and strikes, focusing on the effects of austerity policies in British society.

Joana’s foreign coverage also includes reporting from the Greek elections in January 2015, the Calais refugee camp and a series of pieces on Portuguese social, economic and political matters.

As a political commentator, Joana has been featured on Channel 4 News, BBC and LBC radio, as well as debates against fellow pundits Peter Oborne, Michael White and Peter Hitchens.

Joana holds an MSc in Middle East Politics from the School of Oriental and African Studies, London.

She has worked as an editorial assistant at Pluto Press, as the social affairs correspondent for the Morning Star, as an online reporter and presenter for RT UK, as senior journalist and author Paul Mason‘s researcher, and for several news outlets including the Associated Press, Sunday Mirror, Independent, New Statesman, and Vice.

Joana is currently a freelance writer, editor, producer and broadcaster.